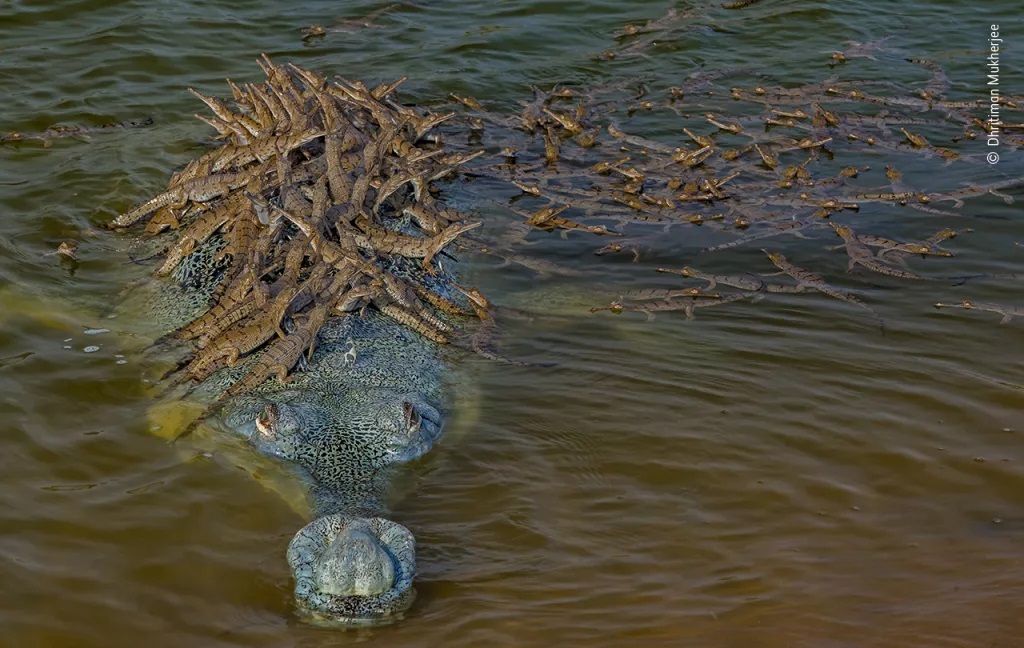 Picking the kids up from school takes on a different meaning for crocodylian parents.

In this photo, taken by India-based photographer Dhritiman Mukherjee, a male freshwater gharial shows us why. Bobbing in the waters of northern India’s National Chambal Sanctuary, the croc waits as more than 100 of his month-old children clamber onto his back for safe passage.

“Other crocs carry their young about in their mouths,” Patrick Campbell, the senior curator of reptiles at London’s Natural History Museum, told BBC.com. “But for the gharial, the unusual morphology of the snout means this is not possible. So the young have to cling to the head and back for that close connection and protection.”

Gharials can measure up to 15 feet (4.5 meters) long and weigh more than 2,000 lbss. (900 kilograms). They are named for the bulbous nobs that males sport on the ends of their snouts. (These nobs are called gharas, which is the Hindi word for “mud pot,” according to National Geographic). Crocs use their gharas to amplify vocalizations and blow bubbles during mating season — an adaptation that seems to have served this particular croc well. According to Mukherjee, the pictured papa mated with seven or eight different females to achieve this brood of 100-plus hatchlings.

Hopefully, all those kids grow into healthy adults and become parents themselves. Gharials are critically endangered, with an estimated 650 adults left in the freshwaters of India and Nepal, according to the Natural History Museum. India’s National Chambal Sanctuary, which Mukherjee patrolled for weeks to get this shot, contains 500 of those full-grown gharials.

Mukherjee’s photo is one of 100 “highly commended” images in this year’s Wildlife Photographer of the Year competition, hosted by the Natural History Museum of London. Chosen from more than 50,000 entries, the image will join 99 others on the museum’s walls and eventually in a traveling exhibition, after the overall winners are announced on Oct. 13

One of last year’s winning entries showcased two subway mice in a desperate struggle over a scrap of snack food. Does Mukherjee’s Gharial Father of The Year have what it takes to dethrone them? Check back in October to find out.